The Illustrated London News has made available their 1914-1918 archives on a free website at http://www.illustratedfirstworldwar.com/
ILN was awarded £96,000 from the Heritage Lottery Fund (HLF) to create a free-to-access website, which will host the digitised wartime magazine pages of a range of titles and rare pictorial material.
From the website -
"With the centenary of the First World War upon us, ILN Ltd, the custodians of the celebrated Illustrated London News and Great Eight Illustrated Magazine collection archives, felt a responsibility to make the 1914-18 archives available to the public for research, education and pleasure. With the help of a grant from the Heritage Lottery Fund, The Illustrated First World War website was created.
Today, for the fist time in 100 years, the public are invited to search the First World War pages of The Illustrated London News.
In the coming months
The Illustrated War News and the wartime years of The Sphere, The Sketch, The Tatler, The Bystander, The Graphic and The Illustrated Sporting and Dramatic News will come online to complete this unique digital collection covering the First World War. To enhance the user experience, we will be adding new functionality, including advanced search functions.  Should there be a demand, our teaching pages will also develop over time."
Posted by Lewisham Information at 05:07 No comments:

"On rejoining the 20th London Captain W. F. Marchant, Mayor of Deptford took over running Holly Hedge House, Blackheath. The headquarters of the Regiment with Captain Theodore Prestige, Deptford's representative on the LCC.

At this time he made the following speech

"Men of Deptford! The Army is mobilised The Mayor is enrolling recruits for your local Territorial Battalion at Holly Hedge House, Blackheath. England expects that every man will do his duty. God save the King."

They also made a joint appeal with the news that the 20th had already been mobilised and gone to its war station to the men of New Cross, Brockley, St John's and Deptford for recruits asking that smart young men apply at Holly Hedge House.

"What we want" said Captain Prestige to a representative of the Kentish Mercury on Wednesday night. "Is young men of the type who need to belong to the old 2nd West Kent Volunteers, and we hope that numbers of such will answer our appeal."

On 7th August 1914 the Kentish Mercury published details of a speech by the Mayor of Deptford, Captain W.F. marchant, who had joined the 20th (County of London) Battalion (Blackheath and Woolwich) of the London Regiment.

You can read this and other featured articles from the local papers on our Lewisham in the First World War wiki
Posted by Lewisham Information at 06:43 No comments:

The Gardeners Go To War

The Lambeth environmental and educational charity Roots and Shoots has produced a professionally made seven minute period newsreel, The Gardeners Go To War, which was shown on their silver gilt award winning garden at this year’s Chelsea Flower Show.

To mark the First World War centenary year, the flickering sepia newsreel tells a little known story of the black soldiers who came from the colonies to fight for the Crown in the Great War, imagining that gardeners were in the ranks.  Roots and Shoots students, all of whom have various special needs and many of whom have Afro-Caribbean heritage, played the gardeners. The project involved them in history, gardening and film-making and helped deepen their ‘roots’ in British culture and strengthen their sense of belonging.

It’s an interesting and enjoyable take on the outbreak of the war.


The Gardeners Go To War from Roots and Shoots on Vimeo.
Posted by Lewisham Information at 08:13 No comments: 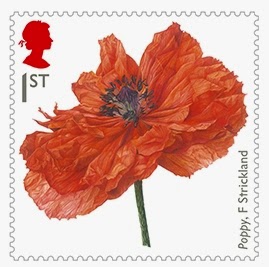 The Royal Mail is producing a special series of stamps to commemorate the First World War.  30 stamps will be issued between 2014 and 2018 and the first 6 are now available. An exhibition of enlarged versions of these stamps is now on display in Lewisham Library.

The stamps will represent several themes associated with the war - How artists, including writers and painters, interpreted the events; the role of non-combatants and civilians; the role of the Services; the role of women, and the contribution of the Commonwealth. 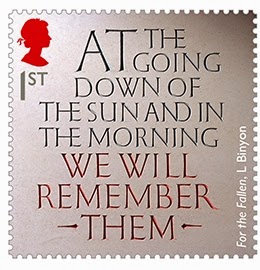 
Poppy
Original artwork by Fiona Strickland, the Scottish born and Edinburgh based leading botanical artist. She is a member of the Royal Society of Botanical Artists and considered among the leading contemporary botanical artists. 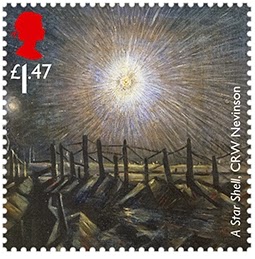 Lines from the poem, ‘For the Fallen’ by Lawrence Binyon. First published in The Times on 21 September 1914, ‘For the Fallen’ is the poet’s response to the first few weeks of the War. It is familiar through its recitation at Remembrance ceremonies in the UK, Australia, New Zealand and Canada. Binyon volunteered for hospital work in France during the War. Royal Mail commissioned a letter-cutter to engrave a section of the poem into stone. This was then photographed and the image used on the stamp. 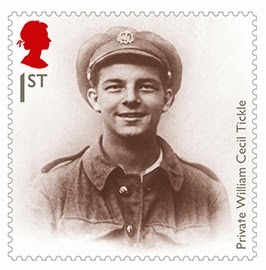 ‘A Star Shell’’ by CRW Nevinson. The image is of a flare that illuminated no man’s land. Nevinson is widely regarded as one of the most important artists of the Great War, with paintings in the collection of Tate Britain and Imperial War Museums. The artwork is on display at Tate Britain.

Portrait
Private William Tickle, who enlisted on 7 September 1914, and served in the 9th Battallion, Essex Regiment. He was accepted despite being under age (15 on enlisting). He served until he was killed at the Battle of the Somme in 1916. This is one of thousands of photographs donated to the Imperial War Museum shortly after the war’s end in response to pleas to send images of those who had died. 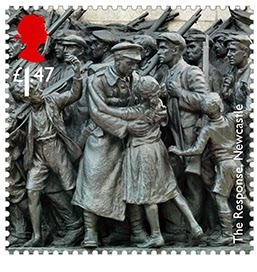 Memorial
‘The Response’, a bronze memorial by Welsh artist Sir William Goscombe John, represents the raising of several companies of the Northumberland Fusiliers and depicts the men joining up in 1914. The memorial is located in a public park in Newcastle-Upon-Tyne. 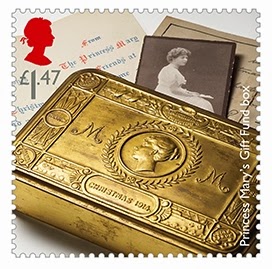 Princess Mary Gift Box. In October 1914, the Christmas Gift Fund was launched by Princess Mary, the 17-year-old daughter of King George V and Queen Mary. The purpose was to provide everyone wearing the King's uniform and serving overseas on Christmas Day 1914 with a 'gift from the nation'. The result was the production of an embossed brass box, which contained a Christmas card and a picture of the Princess along with gifts. Servicemen at the front or at sea who were smokers received a pipe, an ounce of tobacco, cigarettes and a tinder lighter. Non-smokers received a packet of sweets and a writing case with pencil, paper and envelopes.

This information is taken from the Royal Mail website. You can find out more at:


Posted by Lewisham Information at 05:17 No comments:

Four new free, online courses will be available this Autumn to help you discover how the First World War shaped the modern age. They are provided by FutureLearn and its partners and the BBC.

FutureLearn is a private company wholly owned by The Open University, with the benefit of over 40 years of their experience in distance learning and online education. Their partners include over 20 of the best UK and international universities, as well as institutions with a huge archive of cultural and educational material, including the British Council, the British Library, and the British Museum. (https://www.futurelearn.com/)

The BBC has collaborated with four of FutureLearn’s university partners to bring you a fascinating and diverse series of free online courses on the legacy of the First World War. The BBC has contributed vast amounts of its rich cultural and historical footage, to show you how the conflict has shaped individuals, society, technology and world affairs in the 100 years since it began.
The 4 courses that you can follow are -
Paris 1919 - A New World Order?
University of Glasgow
This course reassesses the legacy of the Paris Peace Conference (1919) and how it sought to create a new world order.

Aviation Comes of Age
University of Birmingham
This course investigates how the white heat of innovation in World War 1 shaped the history of human flight.

Changing Faces of Heroism
University of Leeds
Learn how the war moved us away from traditional views of heroism and created new kinds of heroes and heroines.

Trauma and Memory
The Open University


Discover the traumatic effects of war on those that survive it, from the soldiers on the front lines to the civilians at home.

In case you haven't heard of them, the Wikipedia definition of a MOOC is -
"A massive open online course (MOOC; /muːk/) is an online course aimed at unlimited participation and open access via the web. In addition to traditional course materials such as videos, readings, and problem sets, MOOCs provide interactive user forums that help build a community for students, professors, and teaching assistants(TAs). MOOCs are a recent development in distance education which began to emerge in 2012.   "
http://en.wikipedia.org/wiki/Massive_open_online_course

Posted by Lewisham Information at 07:48 No comments:

We have launched 2 new wikis as part of our First World War commemoration work.

London Borough of Lewisham in the First World War

The second wiki is a virtual Book of Remembrance, where you can record details of family members and add a page to the book.

London Borough of Lewisham's Book of Remembrance
Posted by Lewisham Information at 04:02 No comments:

Frontline Letters - An evening of war poems and creative writing from our writers' groups for @CityreadLondon will take place on Wednesday  30 April from 6-8pm at Deptford Lounge.

This is Lewisham's closing event for @CityreadLondon 2014. Using the theme from the Cityread book, ‘My Dear I Wanted To Tell You’ by Louisa Young, writers in Lewisham's groups have created their own responses to First World War letters. Headlining the event will be author, Carol Harris, who will talk about her new book, ‘Women in the War’ and will also be selling copies.

All are welcome.
Posted by Lewisham Information at 02:39 No comments:

Lewisham Remembers is produced by Lewisham Local History and Archives. Contact us at199-201 Lewisham High Street,London SE13 6LGTel: 020 8314 8501Please email us at local.studies@lewisham.gov.uk